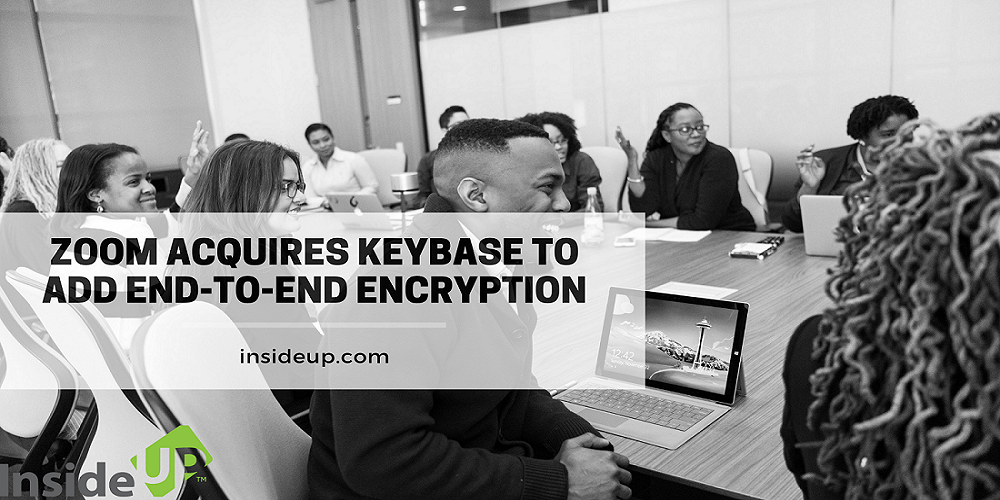 Could we have ever predicted that “Zoom-bombing” (similar to “photo-bombing” where a total stranger jumps in the middle of your frame as you take a selfie photo) would be a thing in 2020?  Certainly not, but it became obvious, as the popular video conferencing app Zoom found its way into the mainstream of business communications this year, that this handy app had to shore up its end-to-end security capabilities.

Zoom recently acquired Keybase, a company that has been enhancing data privacy for Internet users since 2014. It offers a public-key generation and maintenance service that enables users to encrypt assets and transmissions like shared files and social media messages. The acquisition of Keybase will give Zoom a team of engineering experts well versed in the fields of security and encryption technology.

What is end-to-end encryption?

End-to-end encryption is the most reliable way to ensure that businesses communicate securely and privately online. It prevents anyone, able to gain access to the flow of information on a digital transmission line,from having access to the actual private information by encrypting messages emanating from both sides of a conversation.

When end-to-end encryption is used to send a message or an email to someone else, no third-party (neither hackers or the government, short of a court order) will get to see the contents of your message. This includes the company (e.g., Microsoft, Twitter, ) that facilitates that communication and even protects you from the prying eyes of network staff monitoring the server network.

The benefits of end-to-end encryption over conventional “at rest” encryption are as follows:

As the demand for Zoom, in the wake of the Covid-19 crisis, has soared over the last few months, business users have encountered many security issues. Increased usage to support work-from-home employees highlighted Zoom’s many data privacy weaknesses. It also faced criticism for exaggerating its existing end-to-end encryption features. Zoom finally had to apologize for its overstatements and the confusion it was causing around its definition of the technology.

Since Keybase offers encryption tools for secure file-sharing and private collaboration, Zoom’s acquisition will immediately add some needed credibility and, near term, security features will be added to Zoom meetings at a time when the current health crisis is sending demand through the roof.

Zoom will make full end-to-end encryption available as an optional feature for premium members. With the launch of Zoom 5.0 in April, the platform was updated to 256-bit encryption. Using this feature, the encryption keys will be generated by the meeting host. This means that Zoom itself will not be able to view any of the user’s data sent over its network. In some cases, however, Zoom will continue to generate keys on its servers. For instance, when users want to invoke session recording or connect to a third-party room meeting. Combining Keybase’s encryption mechanism into Zoom operations, if integrated appropriately, will offer business users a higher-level of security assurance. Zoom deserves credit for how quickly it has managed to acknowledge and begun to resolve its security issues. This will blunt the impact of competing video conferencing solutions that seek to drive a wedge between personal usage of Zoom and its emerging status as a significant player in the world of business communications.

Let's Meet
At InsideUp, our clients augment their in-house demand generation campaigns by partnering with us to build large sales pipelines. InsideUp has assisted hundreds of thousands of business professionals to select better technology solutions.